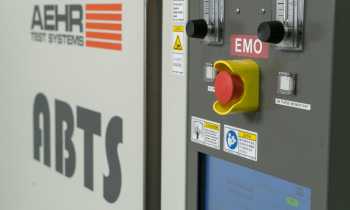 FREMONT, Calif., (GLOBE NEWSWIRE) — Aehr Test Systems (NASDAQ:AEHR), a worldwide supplier of semiconductor test and burn-in equipment, today announced that it has received an order for an Advanced Burn-in and Test System (ABTS) from a prominent United States government military and aerospace contractor. The application is for production burn-in and test of a wide variety of integrated circuits (ICs) designed and built by the contractor, including processors, memories, peripherals, custom ICs, and discrete circuits. This system is planned to ship during the next six months.

Mark Allison, Vice President of Sales of Aehr Test Systems, commented, “This customer previously utilized our legacy burn-in and test systems, and we are pleased they have selected this first ABTS system for testing of their devices for military and aerospace applications, where reliability is absolutely critical. This production burn-in application involves more than 400 types of ICs. We believe some of the key factors behind their selection of the ABTS are the system’s power capabilities, number of test resources and superior thermal performance, as well as its flexibility, backward compatibility with legacy Aehr Test burn-in boards, handling of small lots, and the documentation and confirmation that the devices received the specified burn-in.”

Aehr Test’s ABTS family of products is based on a state-of-the-art hardware and software platform that is designed to address not only today’s devices, but also future devices for many years to come. It can test and burn-in both logic and memory devices and includes resources for high pin-count devices and configurations for high-power and low-power applications. ABTS systems can be configured with up to 72 burn-in boards, up to 320 I/O channels, 32M of test vector memory per channel and up to 16 independent device power supplies. The ABTS system can be configured with a scalable cost-effective individual device temperature control solution for up to 64 devices per burn-in board and up to 75 watts per device or more. Individual temperature control enables high-power devices with a broad range of power dissipation to be burned-in simultaneously in a single burn-in chamber while maintaining a precise device temperature. The ABTS system also uses N+1 redundancy technology for many key components in the system to maximize system uptime.

About Aehr Test Systems
Headquartered in Fremont, California, Aehr Test Systems is a worldwide provider of test systems for burning-in and testing logic, optical and memory integrated circuits and has an installed base of more than 2,500 systems worldwide. Increased quality and reliability needs of the Automotive and Mobility integrated circuit markets are driving additional test requirements, incremental capacity needs, and new opportunities for Aehr Test products in package, wafer level, and singulated die/module level test. Aehr Test has developed and introduced several innovative products, including the ABTSTM and FOX-PTM families of test and burn-in systems and FOX WaferPakTM Aligner, FOX-XP WaferPak Contactor, FOX DiePak® Carrier and FOX DiePak Loader. The ABTS system is used in production and qualification testing of packaged parts for lower power and higher power logic devices as well as all common types of memory devices. The FOX-XP system is a full wafer contact and singulated die/module test and burn-in system used for burn-in and functional test of complex devices, such as leading-edge memories, digital signal processors, microprocessors, microcontrollers, systems-on-a-chip, and integrated optical devices. The WaferPak contactor contains a unique full wafer probe card capable of testing wafers up to 300mm that enables IC manufacturers to perform test and burn-in of full wafers on Aehr Test FOX systems. The DiePak Carrier is a reusable, temporary package that enables IC manufacturers to perform cost-effective final test and burn-in of both bare die and modules. For more information, please visit Aehr Test System’s website at www.aehr.com.

Safe Harbor Statement
This press release contains certain forward-looking statements based on current expectations, forecasts and assumptions that involve risks and uncertainties. These statements are based on information available to Aehr Test as of the date hereof and actual results could differ materially from those stated or implied due to risks and uncertainties. Forward-looking statements include statements regarding Aehr Test’s expectations, beliefs, intentions or strategies regarding its products, including statements regarding future market opportunities and conditions, expected product shipment dates and customer orders or commitments. These risks and uncertainties include, without limitation, customer demand and acceptance of Aehr Test’s products, the ability of new products to meet customer needs or perform as described, as well as general market conditions and Aehr Test’s ability to execute on its business strategy. See Aehr Test’s recent 10-K, 10-Q and other reports from time to time filed with the Securities and Exchange Commission for a more detailed description of the risks facing Aehr Test’s business. Aehr Test disclaims any obligation to update information contained in any forward-looking statement to reflect events or circumstances occurring after the date of this press release.