“We had a very solid quarter, reflecting strong sequential and year-over-year growth in revenue and net income, both ahead of consensus estimates. Our momentum in silicon carbide wafer level burn-in continues to grow. We see this momentum continuing for the next several years as companies are adding significant capacity in silicon carbide semiconductors to address the incredible forecasted demand, particularly for the electric vehicle and electric vehicle charger markets.

“Adding two new customers now provides more optimism about our ability to gain significant market share of the test and burn-in market for silicon carbide devices. These customers expand our penetration beyond our initial lead silicon carbide wafer level burn-in customer that continues to ramp their capacity and use of our FOX-XP multi-wafer test and burn-in systems and WaferPaks. Our lead customer continues to forecast orders for significant numbers of FOX-XP systems and WaferPak Contactors over the next several years.

“In addition to the customers that have now placed initial orders with Aehr for silicon carbide wafer level test and burn-in systems, our ongoing benchmarks and evaluations with multiple prospects made great progress during the quarter. These include significant market leaders in silicon carbide as well as several companies entering the silicon carbide power semiconductor space. We expect several of these companies to place their initial orders with us before the end of this fiscal year ending May 31, 2023. We also continue to see very positive responses from our discussions with a number of new potential customers in silicon carbide this quarter and have also begun detailed discussions with gallium nitride semiconductor suppliers from around the world. Both silicon carbide and gallium nitride semiconductors address the high voltage power semiconductor markets that are significant opportunities for our FOX wafer level test and burn-in systems and WaferPak full wafer contactors. Both device types are forecasted to grow significantly over the next several years and into the future.

“We are also seeing a strong recovery of our silicon photonics wafer level test and burn-in business after the weakness we saw during the pandemic. Halfway through this fiscal year, we have shipped over $5 million in systems, upgrades and WaferPaks to silicon photonics customers, which is over 300% of last fiscal year’s first half revenue for silicon photonics. This jump in revenue is also spread across multiple customers and much of it is for new product designs and qualifications. We have systems installed at over a half dozen customers testing silicon photonics devices used in 5G infrastructure, data and telecommunications transceivers, and a few yet to be announced applications that we are very excited about. With multiple market leaders announcing plans to integrate photonics transceivers into their microprocessors, graphics processors, and chipsets, we believe silicon photonics will become a significant market for wafer level test and burn-in over the next several years.

“Looking ahead, we continue to believe that we will receive production orders from additional silicon carbide companies beyond our current customers and begin shipping systems to meet their production capacity by the end of our current fiscal year that ends May 31, 2023. We are very optimistic for a strong second half of this fiscal year and believe the momentum will continue into our fiscal 2024.”

For the fiscal year ending May 31, 2023, Aehr is reiterating its previously provided guidance for total revenue to be $60 million to $70 million, with strong profit margins similar to last fiscal year. Aehr also continues to expect bookings to grow faster than revenues in fiscal 2023 as the ramp in demand for silicon carbide in electric vehicles increases exponentially throughout the decade.

Aehr Test Systems will host a conference call and webcast today at 5:00 p.m. Eastern (2:00 p.m. PT) to discuss its second quarter fiscal 2023 operating results. To access the live call, dial +1 877-270-2148 (US and Canada) or +1 412-902-6510 (International) and ask to join the Aehr Test Systems earnings call. In addition, a live and archived webcast of the conference call will be available over the Internet at www.aehr.com in the Investor Relations section and may also be accessed by clicking here. A replay of the conference call will also be available via telephone beginning approximately two hours after conclusion of the call and will remain available for one week. To access the call replay, dial +1 877-344-7529 (US and Canada) or +1 412-317-0088 (International) and enter replay passcode 2248525.

This press release contains certain forward-looking statements within the meaning of Section 27A of the Securities Act of 1933 and Section 21E of the Securities Exchange Act of 1934. Forward-looking statements generally relate to future events or Aehr’s future financial or operating performance. In some cases, you can identify forward-looking statements because they contain words such as “may,” “will,” “should,” “expects,” “plans,” “anticipates,” “going to,” “could,” “intends,” “target,” “projects,” “contemplates,” “believes,” “estimates,” “predicts,” “potential,” “sees,” or “continue,” or the negative of these words or other similar terms or expressions that concern Aehr’s expectations, strategy, priorities, plans, or intentions. Forward-looking statements in this press release include, but are not limited to, Aehr’s ability to generate bookings and revenue increases in the future, including the second quarter of fiscal 2023; future requirements and orders of Aehr’s new and existing customers; bookings forecasted for proprietary WaferPakTM and DiePak consumables across multiple market segments; the temporary nature of customer pushouts; shipping timelines for products and follow-on capacity orders; the growth of Aehr’s systems and consumables, including as a percentage of total sales; financial guidance for fiscal 2023, including related to revenue and profitability, and expectations regarding fiscal 2023; Aehr’s ability to expand its number of customers using its FOX-PTM solutions; the ability to secure potential customer engagements; and expectations related to long-term demand for Aehr’s productions and the attractiveness of key markets. The forward-looking statements contained in this press release are also subject to other risks and uncertainties, including those more fully described in Aehr’s recent 10-K, 10-Q and other reports filed from time to time with the Securities and Exchange Commission. Aehr disclaims any obligation to update information contained in any forward-looking statement to reflect events or circumstances occurring after the date of this press release. 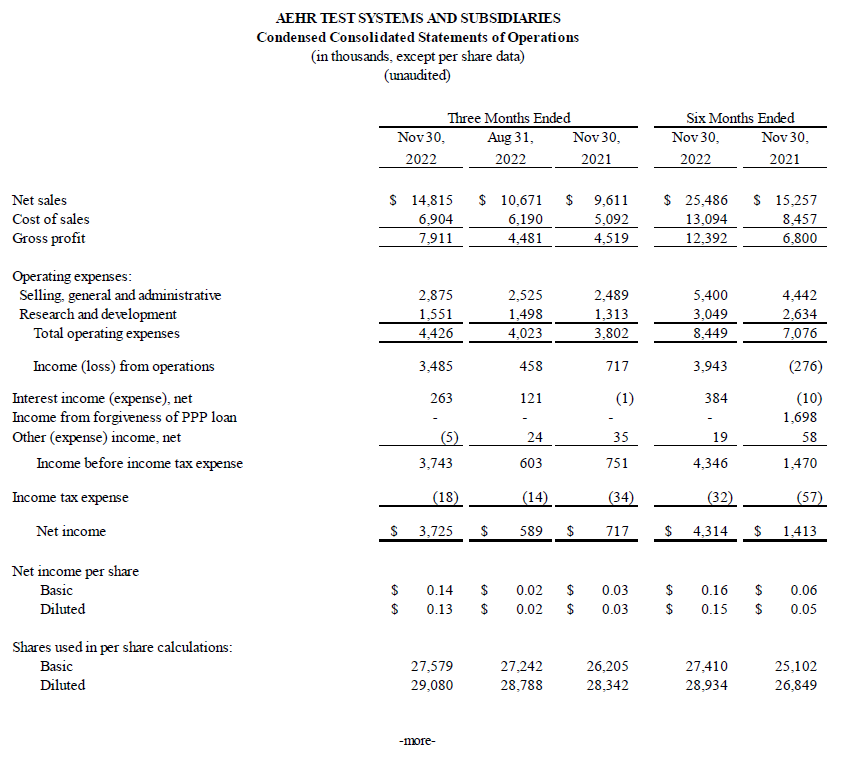 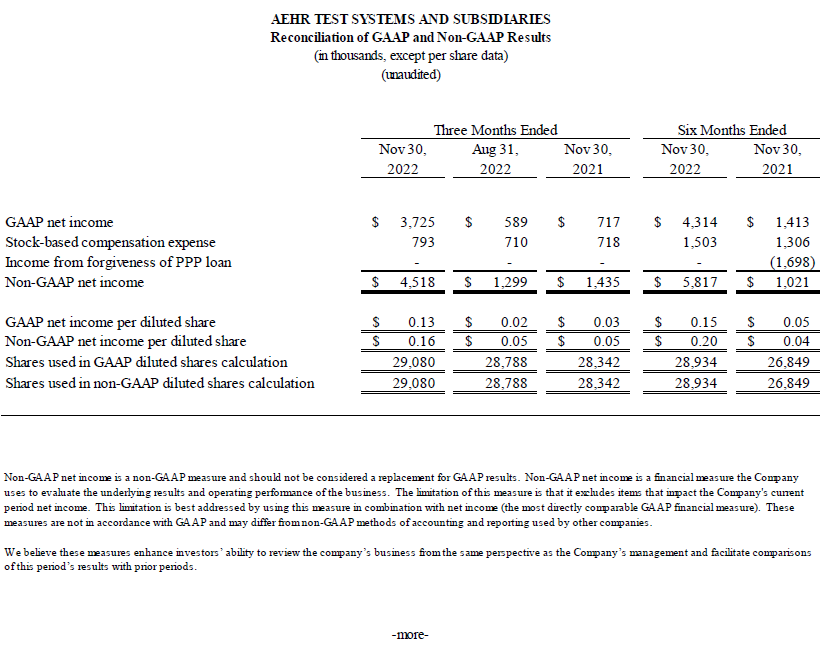 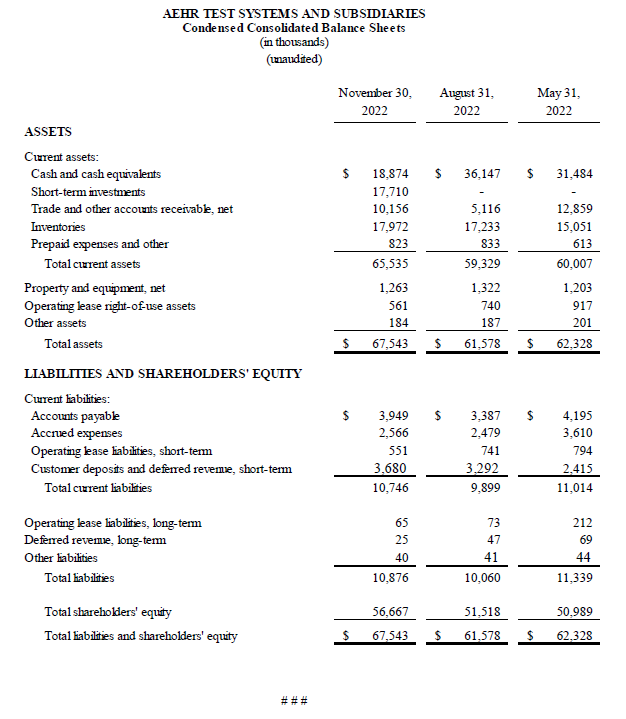