“We made substantial progress with our new FOX products for wafer and singulated die test and burn-in during the year that strengthened our customer base, expanded our markets, and enhanced our operations and sales capabilities to capitalize on the significant market opportunities we see ahead.

“We added three key Tier 1 customers this past fiscal year. We now have six significantly large Tier 1 customers with applications and market sizes that are each capable of driving sales of $6 million to $10 million or more per year of our FOX wafer level and singulated die test systems and consumables. We also have another seven Tier 2 customers that are each capable of FOX product sales typically within $1 million to $3 million per year. In addition, five of our customers moved to production during the fiscal year using our FOX products for 100% stabilization or infant mortality burn-in of devices.

“This past fiscal year we successfully installed our first production capacity for silicon carbide devices, adding it to the list of markets such as silicon photonics, 2D & 3D sensors, automotive, and lasers used in photonics devices that have shown the value and feasibility of using our FOX solutions to address these market needs. We see an increasing awareness and adoption rate that we believe could drive the majority of the market for silicon carbide as well as silicon photonics to move to wafer level or singulated die burn-in within the next few years.

“This new silicon carbide application with a Fortune 500 market leader in silicon carbide and power modules adds a significant new Tier 1 customer of our FOX-XP TM system and WaferPaks for whole wafer burn-in and infant mortality screening of silicon carbide (SIC) devices. Since our initial installation in January, we have received multiple follow on orders for additional WaferPaks including multiple new designs and now have a significant number of different devices that have been put into production. This customer is forecasting additional capacity needs for our FOX-XP Wafer Level Test & Burn-in systems during this fiscal year and for years into the future.

“We see the total available opportunity for silicon carbide and silicon photonics wafer level and singulated die test markets to be approximately $250 million of needed capacity including consumables. We are currently engaged with over a dozen potential Tier 1 and Tier 2 customers for both silicon photonics and silicon carbide applications, and we expect several of these potential customers to place initial orders this fiscal year, with ramps into production later in the current fiscal year or in fiscal 2022. We are also seeing renewed activity and interest for our FOX systems and consumables for several new applications in the 2D and 3D sensor markets particularly for mobile devices and believe this could add to our currently forecasted revenue for this fiscal year and next.

“Although COVID-19 has created challenges such as international travel, some small impacts on our supply chain, and caution and/or delays with some customer production ramps, we believe there will be no long-term impact to Aehr, the demand for our products, or for the attractiveness of the key markets that we serve. We absolutely believe that we will come out of this worldwide pandemic stronger than we went in with more production customers, more applications, and higher value products. Our key customers’ products are being used to build out new data centers, improve data rates and increase storage in data centers, build out of the 5G infrastructure, enable the newest sensors and technology in smartphones and tablets, enable the wide spread adoption of electric and hybrid electrics vehicles andcharging stations, and address the unstoppable demand for memory and data storage in computing, data centers, mobile devices and hundreds of applications that are keeping the world connected.

“As we move into fiscal 2021, we remain optimistic about growth in systems and consumables within our installed base of customers as well as expanding the number of customers with our family of FOX-P solutions. We expect significant growth in both our top and bottom lines moving forward, with much lower fixed operating expenses and significantly higher margin products and services.”

Fiscal 2021 Financial Guidance:
For the fiscal year ending May 31, 2021, the Company expects full year total revenue to be between $25 million and $28 million, which would represent growth between 12% and 26% year over year, and to be profitable for the fiscal year.

Management Conference Call and Webcast
Aehr Test Systems will host a conference call and webcast today at 5:00 p.m. Eastern (2:00 p.m. PT) to discuss its fiscal 2020 fourth quarter and full year operating results. To access the call dial 800-367-2403 (+1 334-777-6978 outside the United States) and give the participant pass code 7836578. In addition, a live and archived webcast of the conference call will be available over the Internet at www.aehr.com in the Investor Relations section. A replay of the conference call will also be available via telephone beginning approximately two hours after conclusion of the call through 8:00 p.m. ET on July 23, 2020. To access the replay dial-in information, please click here.

About Aehr Test Systems
Headquartered in Fremont, California, Aehr Test Systems is a worldwide provider of test systems for burning-in and testing logic, optical and memory integrated circuits and has installed over 2,500 systems worldwide. Increased quality and reliability needs of the Automotive and Mobility integrated circuit markets are driving additional test requirements, incremental capacity needs, and new opportunities for Aehr Test products in package, wafer level, and singulated die/module level test. Aehr Test has developed and introduced several innovative products, including the ABTSTM and FOX-PTM families of test and burn-in systems and FOX WaferPakTM Aligner, FOX-XP WaferPak Contactor, FOX DiePak® Carrier and FOX DiePak Loader. The ABTS system is used in production and qualification testing of packaged parts for both lower power and higher power logic devices as well as all common types of memory devices. The FOX-XP and FOX-NP systems are full wafer contact and singulated die/module test and burn-in systems used for burn-in and functional test of complex devices, such as leading-edge memories, digital signal processors, microprocessors, microcontrollers, systems-on-a-chip, and integrated optical devices. The FOX-CP system is a new low-cost single-wafer compact test and reliability verification solution for logic, memory and photonic devices and the newest addition to the FOXP product family. The WaferPak contactor contains a unique full wafer probe card capable of testing wafers up to 300mm that enables IC manufacturers to perform test and burn-in of full wafers on Aehr Test FOX systems. The DiePak Carrier is a reusable, temporary package that enables IC manufacturers to perform cost-effective final test and burn-in of both bare die and modules. For more information, please visit Aehr Test Systems’ website at www.aehr.com.

Safe Harbor Statement
This press release contains certain forward-looking statements within the meaning of Section 27A of the Securities Act of 1933 and Section 21E of the Securities Exchange Act of 1934. Forward-looking statements generally relate to future events or Aehr’s future financial or operating performance. In some cases, you can identify forward-looking statements because they contain words such as “may,” “will,” “should,” “expects,” “plans,” “anticipates,” “going to,” “could,” “intends,” “target,” “projects,” “contemplates,” “believes,” “estimates,” “predicts,” “potential,” or “continue,” or the negative of these words or other similar terms or expressions that concern Aehr’s expectations, strategy, priorities, plans, or intentions. Forward-looking statements in this press release include, but are not limited to, statements regarding the temporary nature of customer pushouts and customer needs for additional system capacity and consumables in fiscal year 2021; the impact of Aehr’s restructuring on its ability to achieve higher future profitability; the ability of current awareness and adoption rates to drive the markets for silicon carbide and silicon photonics to move to wafer level or singulated die burn-in; customer capacity needs forecasts related to Aehr’s FOX-XP Wafer Level Test & Burn-in systems; our expectations related to the timing and volume of our lead customer’s future purchases; the total available opportunity for silicon carbide and silicon photonics wafer level and singulated die test markets; expectations regarding the timing and occurrence of initial and subsequent orders of potential customers and the related impact on Aehr’s forecasted revenues; increases in Aehr’s customers, applications and product value after the COVID-19 pandemic; growth in systems and consumables within Aehr’s installed base of customers and expansion of the number of customer’s in Aehr’s FOX-P solutions; Aehr’s top and bottom line growth, lower fixed operating expenses and higher margin products and services in 2021; and Aehr’s revenue in fiscal 2021. The forward-looking statements contained in this press release are also subject to other risks and uncertainties, including those more fully described in Aehr’s recent 10-K, 10-Q and other reports from time to time filed with the Securities and Exchange Commission. Aehr disclaims any obligation to update information contained in any forward-looking statement to reflect events or circumstances occurring after the date of this press release. 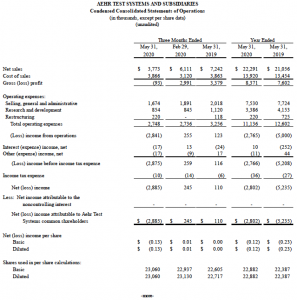 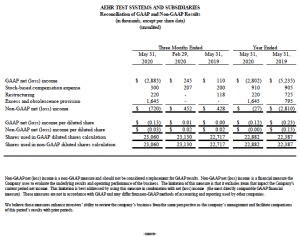 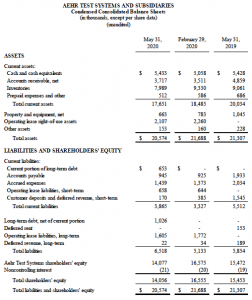